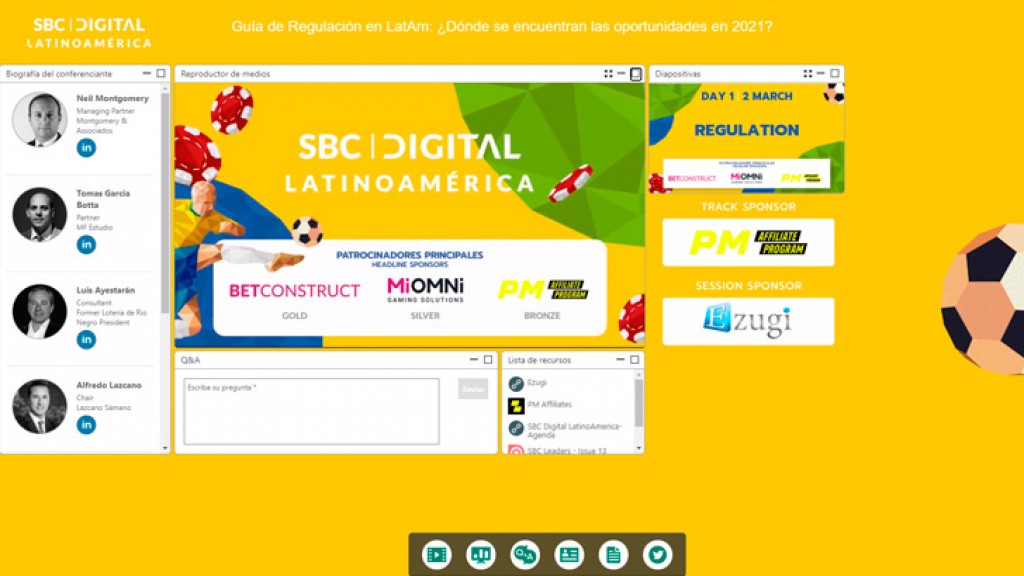 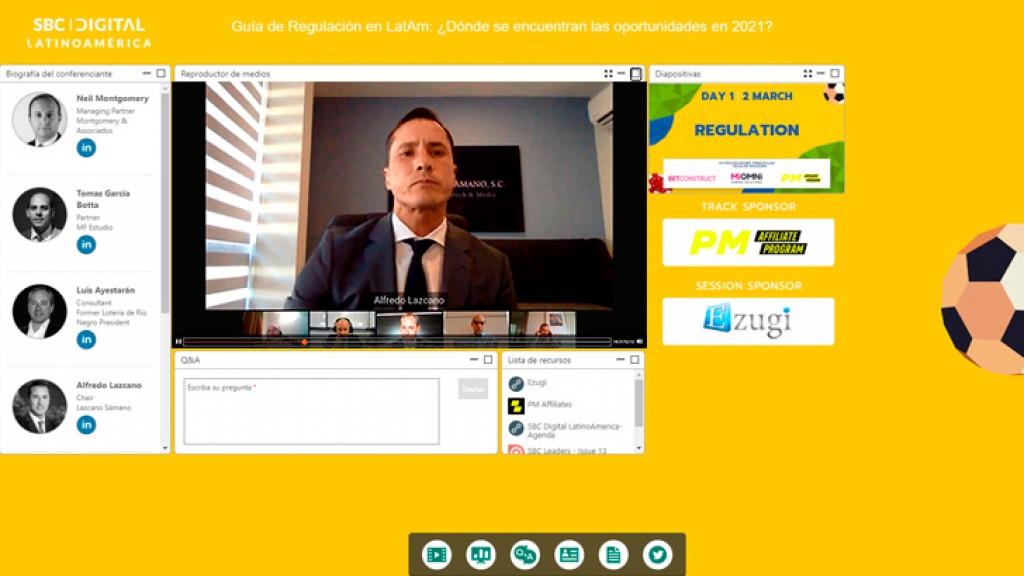 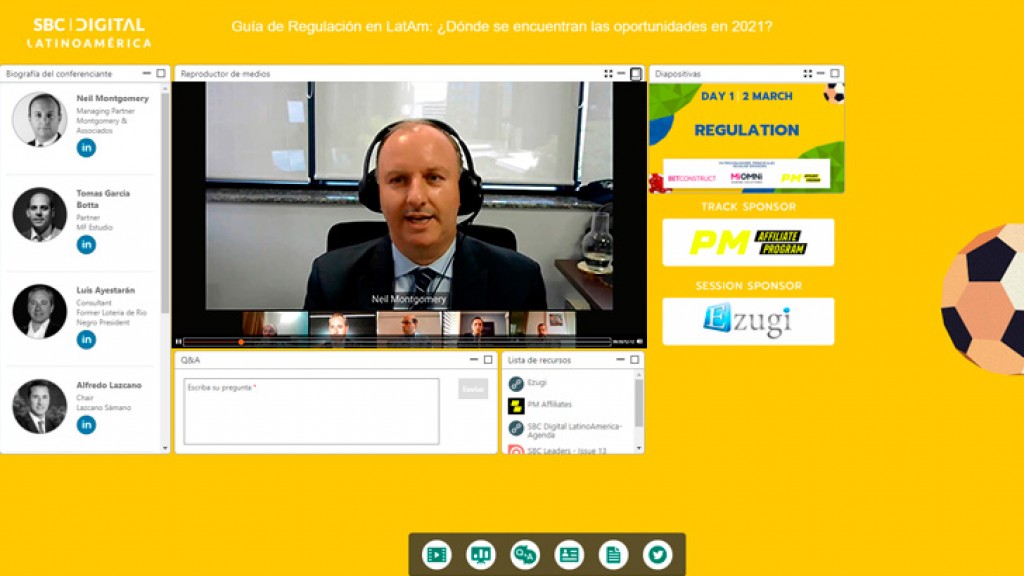 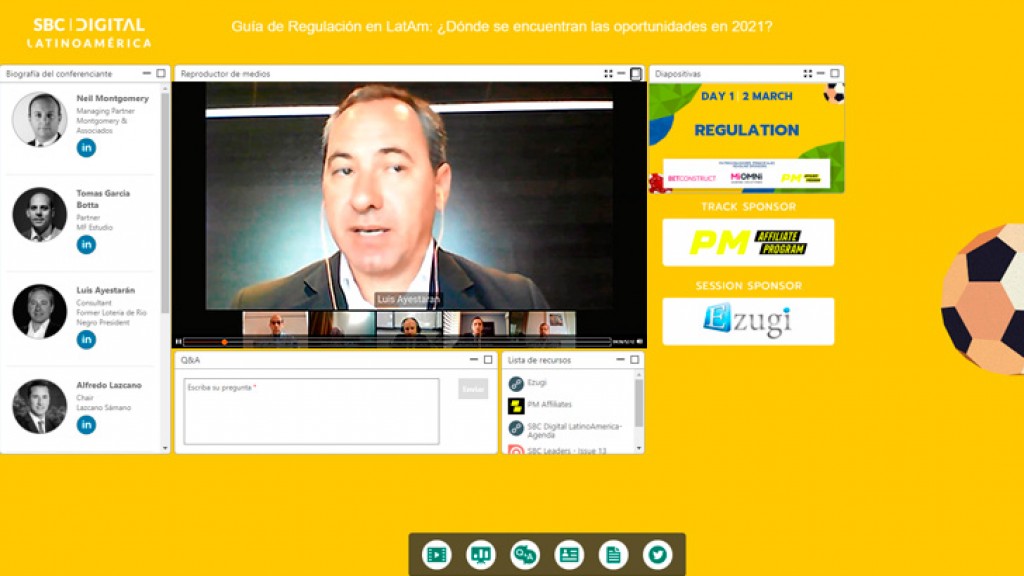 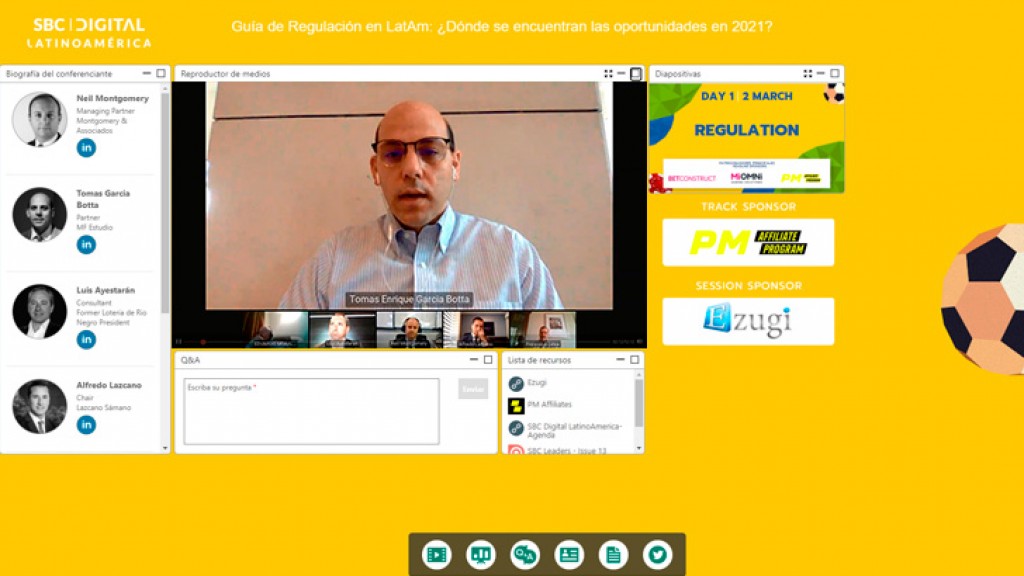 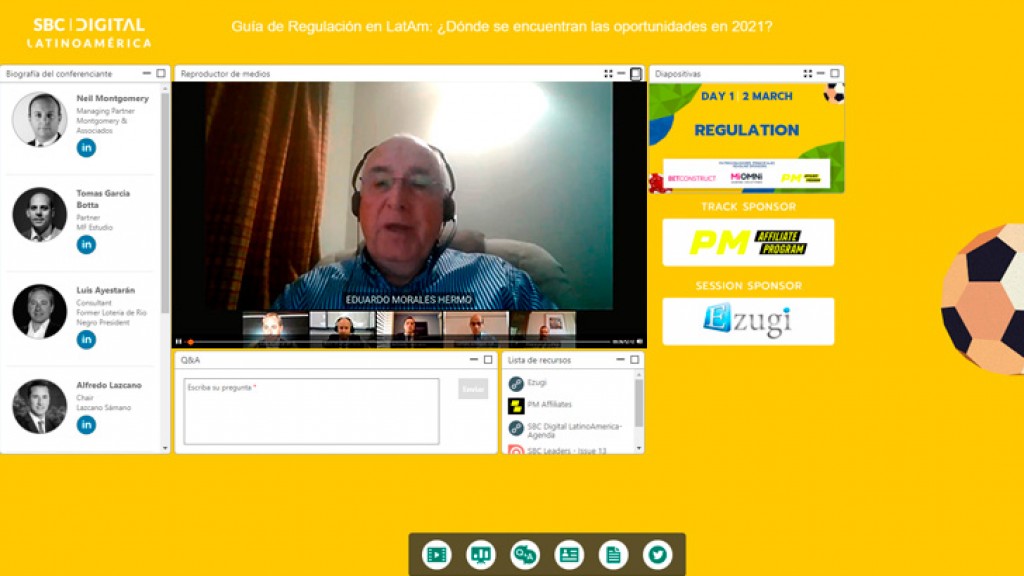 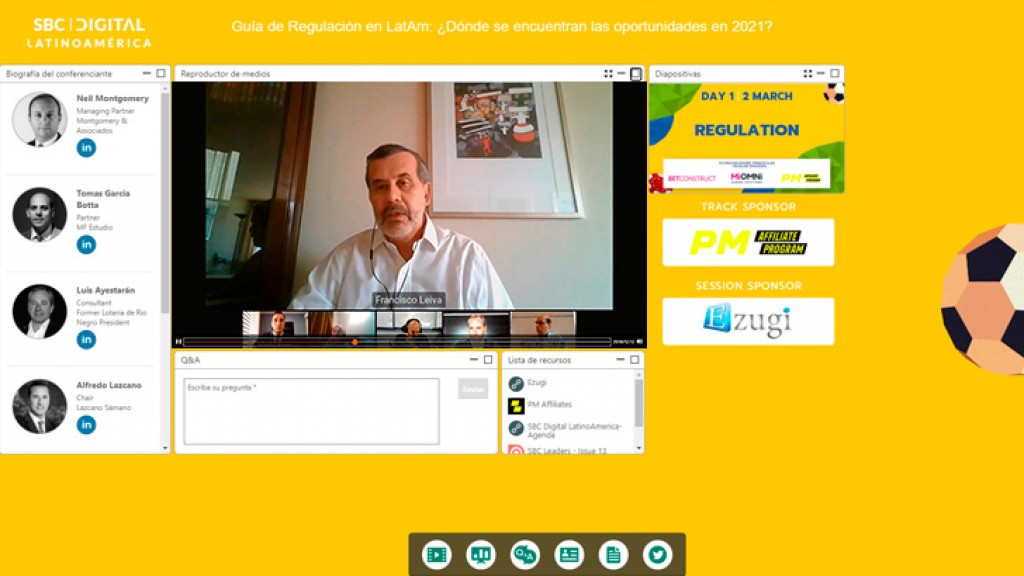 SBC Latin America - Regulation in LatAm and opportunities for 2021

(Latin America, SoloAzar Exclusive).- Regulation Guide in LatAm: Where are the opportunities in 2021? It was one of the conferences held this week within the framework of SBC Digital Latin America. Eduardo Morales Hermo, Moderator of the talk, introduced all the speakers, who commented on how they see the regulation in different countries of the region. 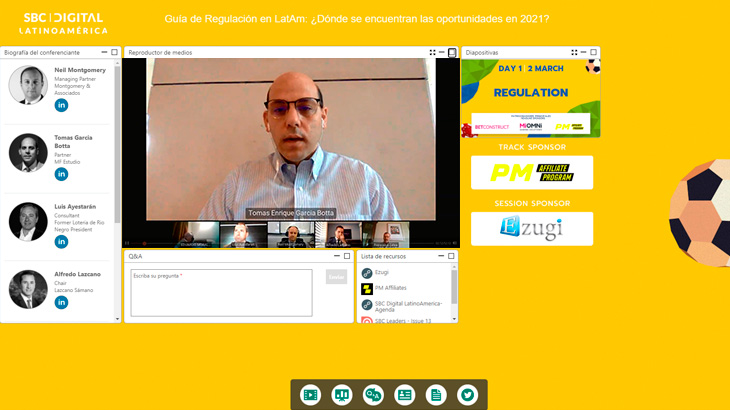 Tomás Enrique García Botta, Partner, MF Estudio: "2020 ended with the granting of 7 online gambling licenses in the Province of Buenos Aires to the main operators in the industry, all united with face-to-face gambling operators. Similarly, there are 3 enrolled in the online gambling license process in CABA; it is a process that is progressing very well."

He also said that there is a stricter regulatory reaction in Latin America, which is revaluing these markets. "Hand in hand with this, the processes announced in Brazil help generate a lot of interest in the region," he added. 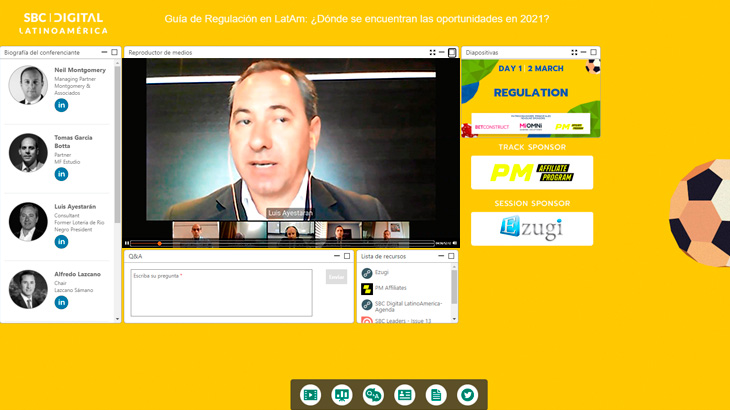 Luis Ayestarán, Founding Partner, Betpertise, agrees with García Botta in the fact that, as in Europe, there is a much stronger regulatory intention, and the world sets its eyes on Latin America, mainly on the markets of Argentina and Brazil. "Although in Brazil there have been expectations of regulation for a long time and it has not yet been specified, this time it seems that the regulation proposal and the intention of the federal government is much more serious, due to the need for resources and the search for sources of funding from the state, especially from the pandemic."

"In Argentina, the interest is not only in the Province of Bs As and CABA, but other provinces in the interior of the country, such as Mendoza, which has produced a very avant-garde and modern regulation. Córdoba, Santa Fe and Entre Ríos can also be successful in issue of sports betting and online gaming due to the volume of their markets, "he added.

When asked about the tax issue in Argentina, Garcia Botta said: "It is a federal country and that brings its own challenges in terms of tax powers. At the federal level, I do not see that there can be room for a tax reduction. Argentina faces a large fiscal deficit and in this context it is difficult to think of a change. At the provincial level I see a little more light as it can be agreed with the operators."

Ayestarán stated: "In December 2016 a tax was imposed on online gambling. I do not see a danger in terms of the tax factor being an obstacle to the development of online gambling. Another important factor to take into account is the fight against illegal gambling. Because that is related to the size and future of the market, and Brazil must also take it into account. Today there are many technologies to combat illegal gambling." 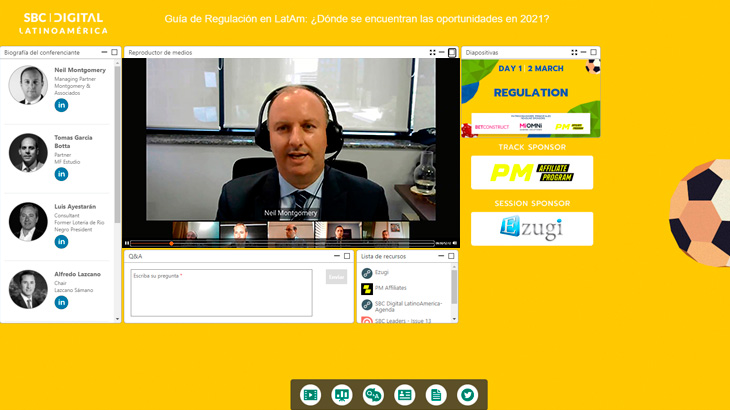 For his part, Neil Montgomery, Founding Partner, Montgomery & Associados, commented on the situation in Brazil: "2021 seems to be the year for Brazil finally, after decades of waiting. It is expected that the Federal Sports Betting Law that was promulgated in 2018 to enter into force in July of this year."

He also spoke about the opening of the licensing process of the National Development Bank (BNDS), which began in February, with the purpose of setting up the legal framework for sports betting. 66 companies applied and 38 were selected for the next phase, which is to receive the Request for Proposal.
However, it says that it is still too early to know what will be the number of licenses available and that it is not yet known what the concession model will be. 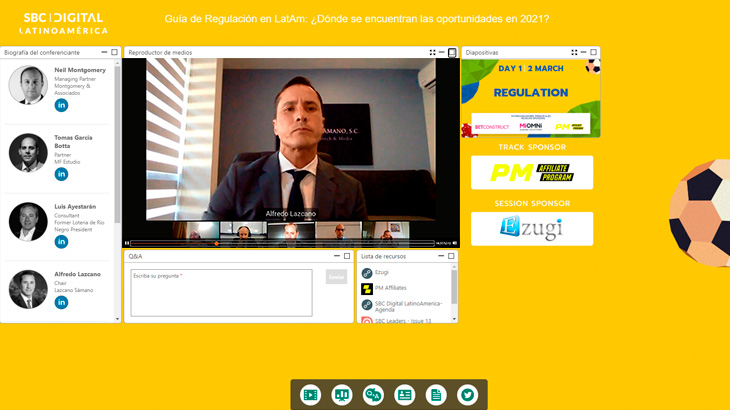 Alfredo Lascano, Chair, Lazcano Sámano, S.C. clarifies the current situation in Mexico: "Although we have an old regulation here in Mexico, it is a market that has been stable for almost 2 decades, where remote bets have been provided for in the regulation since 2004. Second, it is not necessary to set up a physical casino to operate an online casino. In practice, it does happen that foreign operators are associated with Mexican licensees (permit holders) and this has some advantages, such as the political relations provided by local partners. Another advantage is at the fiscal level. The third is that it facilitates access to the banking sector. In addition, physical casinos can act as kiosks or receiving payments, and the fourth advantage is that it facilitates quick entry to the market.

Then he adds that it is necessary to strengthen its regulation in terms of technology. 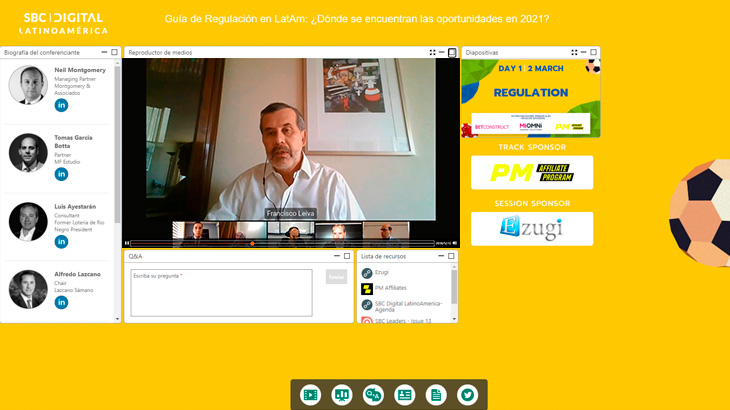 Finally Francisco Leiva, Consultant, Former Chilean Gambing Regulator, analyzes the situation in Chile from his perspective. "Chile has been further behind in relation to other markets such as Mexico. Chile has the peculiarity that online games are not authorized, they are prohibited, and therefore the country has lagged behind. So much so that the law expressly prohibits that physical casinos can operate online."

However, he adds that there are certain signs that show that this situation of delay can be corrected during this year. "A first sign is the law of June last year, which regulated digital taxes. It is implicitly validating the operation in Chile of gambling operators that are outside the country. This year a bill to advance in Congress would also advance regulating online gambling. It is complex because this year in Chile is an electoral year, but I want to highlight the political signal from the Ministry of Finance to introduce a project of this type for its treatment, "he said. 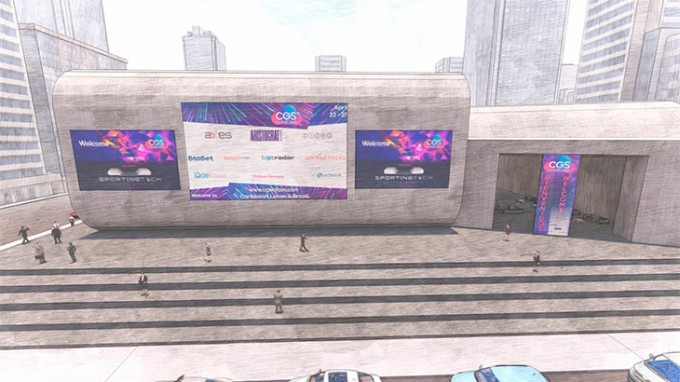 #CGSLATAM is extending the event 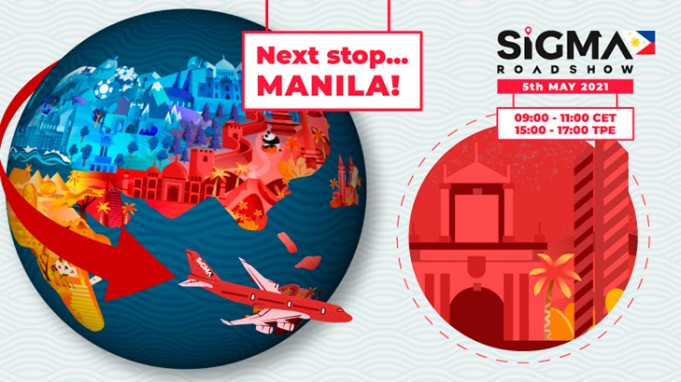 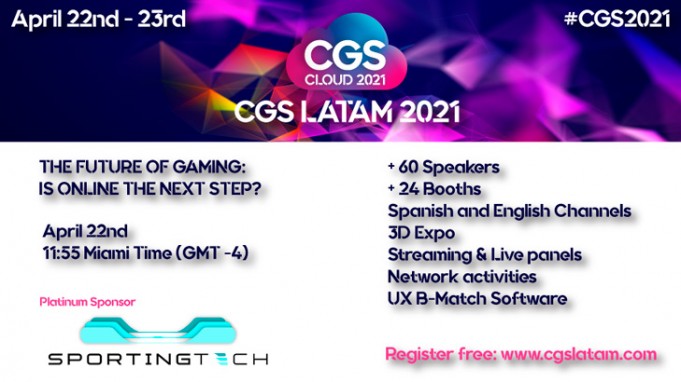 CGS 2021 presents ´The Future of Gaming: Online is the Next Step´, a panel sponsored by Sportingtech

´At Zitro we have invested a lot of effort, material and human, to continue creating incredible products´

(Spain, SoloAzar Exclusive) .- "In these months we have managed to look for creative commercial and financial formulas," said Sebastián Salat, CEO of Zitro, in an exclusive interview with SoloAzar, i...

(Germany, SoloAzar Exclusive).- On the occasion of a year since the world changed its habits and routines in order to cope with the Covid-19 pandemic, SoloAzar interviewed David Orrick, Director of In...

(Las Vegas, SoloAzar Exclusive).- Since it is marking a year in which everyone, people and companies, had to make a big change in their work and personal routine due to the Covid 19 pandemic, SoloAzar...